Skip to content (Press Enter)
HomeTravelVisiting Barrow, (Utqiaġvik) Alaska – The Northernmost Town in North America: What You Need to Know

Utqiaġvik, Alaska (also known as Barrow, Alaska) is the northernmost town in North America. It’s the ninth northernmost city in the world and sits 320 miles inside the Arctic Circle.

The population of Barrow, Alaska is just over 4,000 people and, if you can believe it, the sale of alcohol is illegal.It’s no wonder you want to visit such an intriguing place. Even the original Iñupiat name is mystifying. (Utqiaġvik pronunciation is oot-kee-arg-vick, by the way).

Yes, Utqiaġvik should be on any intrepid traveler’s bucket list as it requires some determination and know-how to even get to this place. And once you’re there, prepare to immerse yourself in this tiny, remote community to truly understand its charm.
Lucky for you, this travel guide includes all the information you need to plan an unforgettable trip to Utqiaġvik or Barrow, USA.
Disclaimer: I may make a small commission off of any of the affiliate links below at zero cost to you! If you book through my links it helps support this blog and is very much appreciated.

How To Get To Barrow/Utqiaġvik Alaska

So, where is Barrow, Alaska or Utqiaġvik, Alaska? As you might already know or have guessed, Utqiaġvik sits a little west of center on the north coast of Alaska.

In Back to the Future, Marty McFly and Doc didn’t need roads where they were going. But you won’t have the option of driving to Utqiaġvik, Alaska by roads because there aren’t any! Well, there are roads in the city but not to the city. The only way you’re getting to Utqiagvik is by plane.

Direct flights to Barrow, Alaska leave Anchorage Airport via Alaska Airlines every day (and vice versa). It’s usually an afternoon flight and takes just under two hours. And there are direct flights to Anchorage, one of Alaska’s biggest cities, from major cities all over the US.

Some of the main options include Seattle, Portland, Los Angeles, Las Vegas, Phoenix, Chicago, and Minneapolis.

You can also book Barrow flights and excursions from Fairbanks, too. Some tour companies offer morning flights to Utqiaġvik where you can spend around seven hours in the city before hopping on an evening flight back. Check out Alaska Wildland, Tundra Tours Inc, and Northern Alaska Tour Company to consider your options.

You might have assumed that, since Utqiaġvik is on the coast, that boat would also be a transport option. Perhaps a stop on an Alaskan cruise? But you’ll have no such luck as there is no regular ship that travels to this city. Booking flights to Barrow will be your best option.

INTERACTIVE MAP
Places mapped by Wanderlog, an itinerary planner on iOS and Android

Brutally long and bitterly cold winters and very cold summers characterize Barrow, Alaska. It’s nothing less than you’d expect of a city hundreds of miles inside the Arctic Circle.

The coldest Barrow, Alaska weather lasts for around four and a half months between November and April. Around the winter solstice, the sun will not rise on Utqiaġvik for around 65 days. In these months, there is a lot of snow, wind, and fog.

The warmest Utqiaġvik weather lasts for around three and a half months between June and September. This is when the temperatures are finally above freezing.

Like other places in the Arctic Circle, Utqiaġvik will not see a sunset for several weeks around the summer solstice. It will shine 24/7, making up for the dark winter days.

Best Times of Year To Go to Barrow/Utqiaġvik Alaska

Unless you are the abominable snowman, traveling to Utqiaġvik, Alaska in the middle of winter wouldn’t be the best idea. Not only because the city will be completely dark and well below freezing, but because fewer facilities or amenities will be open. Though you do have fantastic odds of seeing the Northern Lights during these months.

The best time to visit Barrow, Alaska would be during the warm season from around June 5th to September 15th. Flights and activities are more likely to run during this time. Plus, you get to enjoy 24 hours of daylight every day!

Spring and summer are also the best seasons to visit if you want to spot some of the local wildlife. Birds fly back to the area to take advantage of the wealth of daylight. There’s more activity from animals in the ocean in the warmer months too. If you’re lucky, you can see polar bears in the spring but be careful they do wander around town and it’s not advised to wander alone for too far unless you’re with a tour. They are aggressive if you were to run into one!

Want to visit the most northern city in the US during a cultural festival? You’re in luck! They have one, and it’s the Nalukataq Whaling Festival.

It takes place during the last two weeks of June around the summer solstice. It’s celebrated to give thanks for a successful spring whale hunting season.

Locals perform traditional Iñupiat songs and dances where they toss someone into the air using a blanket made from seal skins.

Top Things To Do in Barrow/Utqiaġvik Alaska 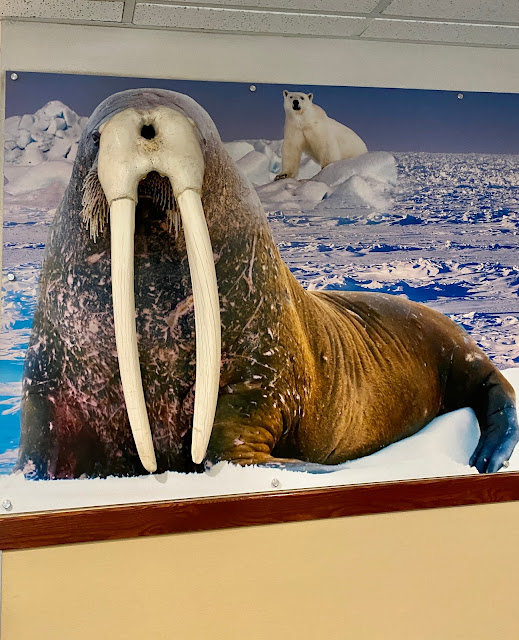 The city, like its dual misnomer suggests, is a city of two halves. One half of life in Barrow, Alaska consists of dirt roads, junk yards, and foreign oil companies. The other half consists of local Iñupiat people attempting to hold onto their culture and protect their wildlife and landscape.

Most of the top attractions and things to do in Barrow/Utqiaġvik, unsurprisingly, focus on the latter. Yet, it’s important to paint a complete picture of what this unconventional yet captivating city is like in real life. 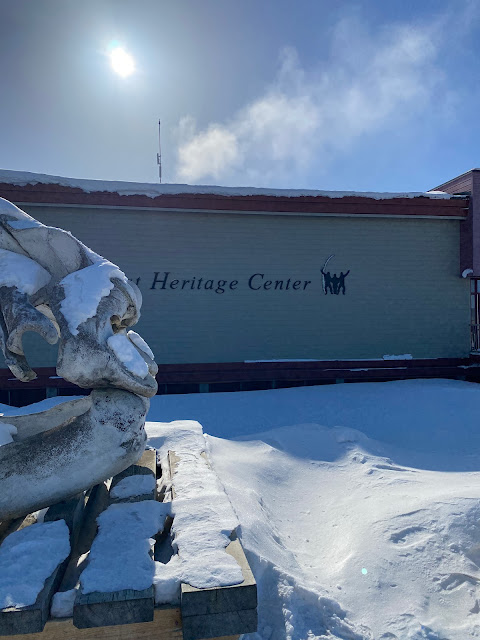 By far the top attraction in Utqiaġvik is the Iñupiat Heritage Center. This museum has tons of exhibitions on the history of the native Iñupiat people including artwork, tools, clothing, and even technology. You’ll be able to learn about their traditions and ceremonies from people that identify as part of this culture too.

They even have residence programs so there are always locals available to teach visitors how to make traditional crafts.

This place is technically nine miles north of Utqiaġvik. But since it is the northernmost point of all United States territory then it’s worth the trek. There is a Point Barrow Air Base here too that you can check out.
You will need to either hire a local taxi driver or join a tour to get there. The hotel I stayed in, will actually help organize tours for you. 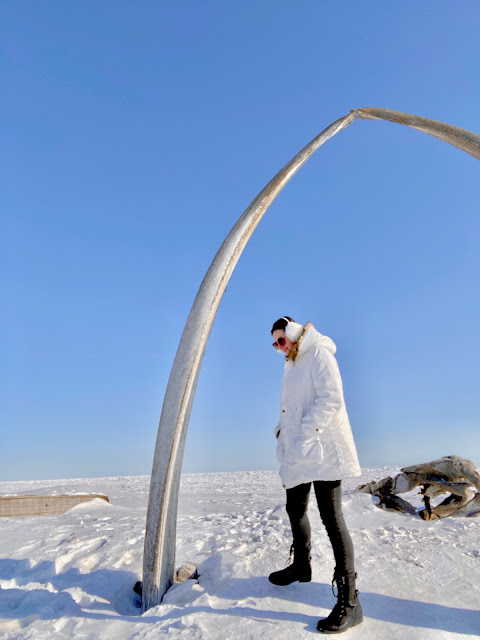 One of the most iconic shots of Barrow is the Whale Bone Arch on the Arctic Ocean shoreline. It’s a highly Instagrammable arch made from a literal bowhead whale’s jawbone with some other smaller whale bones resting nearby. It helps put into perspective just how huge the local whales are.

You can also enjoy a dip in the Arctic Ocean (if you dare!) and a walk along the Lagoon Boardwalk after checking out the arch.

Speaking of whales, many species of wildlife call Utqiaġvik home.

In the waters, you can spot ringed seals, bearded seals, walruses, whales, and so much more. If you bring your binoculars then you might be able to spy Steller’s Eiders and Spectacled Eiders nesting in the trees. Ross’ Gulls, snowy owls, and so many more bird species fly into Barrow during the warmer months too.

On land, you might be able to spot arctic foxes, caribou, and even polar bears too. Taking a wildlife excursion or hiring a local guide is without a doubt the best way to increase your chances of seeing animals. They will know all the secret spots where the animals hang out.

The foodie scene in Utqiaġvik is small yet eclectic. Sam & Lee’s Asian-inspired restaurant holds the reputation as being the best and most welcoming restaurant in the city.

Check out Arctic Pizza and Niggivikput Restaurant for classic American options. Niggivikput restaurant is located in the Top of the World Hotel, where I stayed and has some fun breakfast options. I had the chance to try reindeer (which was actually really good!)

Cold Man Coffee is one of your only options if you like visiting cafes on your travels but luckily it has great reviews.

While Barrow doesn’t have a mega mall, there are one or two gift shops you can visit to bring back local souvenirs for your loved ones. Visit La Bamba Gift Shop or Barrow Souvenirs & Gifts. The Heritage Center and some of the hotels also have their own gift shops.

Cost of Traveling to Barrow/Utqiaġvik Alaska

Planning a trip to the edge of the world was never going to be the cheapest vacation you could choose. But it’s also far from the most expensive, especially if you tag it onto a trip that you’re already taking to Anchorage.One way flights to Utqiaġvik from Anchorage start from $163 per person. This means a round trip will cost at least $326.

Rates for a standard room at the Top of the World Hotel, one of the most luxurious Utqiaġvik hotels, start from $258.17 per night. Latitude 71 B&B charges at least $200 per night with breakfast included. Other hotels and B&Bs in the city, like the King Eider Inn, also have similar starting rates.

Keep in mind that you are unlikely to spend more than one or two nights in the city.Most entrees at the restaurants like Sam & Lee’s, or Niggivikput restaurant for example, cost around $20.

Believe it or not, it’s actually cheaper to eat out here than buy groceries! Barrow actually has the most expensive grocery store in the United States. I had to go see it for myself just to believe it!

The Iñupiat Heritage Center only costs $10 entry fee and many of the other activities are free unless you decide to pay for an extra tour. Taxis will run you $6 one way anywhere in the town and only take cash so be sure to pull some out before you visit. I made the mistake of not doing this and had to hitchhike from the airport. Thankfully my hotel had an ATM!

Ready To Travel to the Most Northern Town in the United States?

Whether you call this city Barrow, Alaska or Utqiaġvik, Alaska, it will provide you with the same unique experience. You’ll be able to say you traveled to the most northern city in the US and saw things that so few get to see.

And this travel guide provides you with all the information you need to make this experience happen. 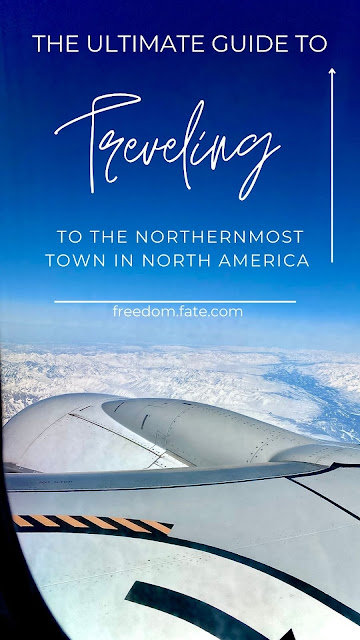