Skip to content (Press Enter)
HomeCouchsurfingI used Couchsurfing in one of the most “dangerous cities in the USA” – Here’s how it went.

Anchorage, Alaska ranked as the most dangerous city in the USA in 2021 according to several articles and sites and has been listed consistently in the top 10 most dangerous cities in the United States over the years.

I had heard many, not so great things about Anchorage and was wary when choosing it to travel to in Alaska. I had originally planned this whole great adventure for my birthday this year to overland from Seattle to Deadhorse, Alaska (which is the furthest north you can drive in North America and borders the Artic Ocean) and both friends I was going to travel with sadly had to cancel on me. ( It happens! )

Thankfully, I’m someone who’s comfortable solo traveling so I decided to still go to Alaska – HOWEVER, because of rising gas costs this year and still being somewhat on a budget, there was absolutely no way I could afford to overland and pay for the rental car and gas costs on my own. I asked around to see if anyone else wanted to come with me before scrapping my entire road trip and researching alternative ways to get around Alaska as a solo female traveler.

Man, let me tell you – it was ROUGH. Alaska is not really built for solo adventure travelers unless you have a ton of money to take flights around or foot a rental car bill. Because I was going during tourist off-season there were no tours running and I found even the train to get from one area of the state wasn’t running due to avalanche risks. (yes, it’s a real thing)

So before booking hotels I figured I’d check Couchsurfing to see if anyone would be willing to host for the few days I would be in Anchorage. I sent out a request to a few families and got one back from a lovely couple who said they could host.

I won’t lie I was a bit nervous couch surfing in Anchorage since it really has a bad reputation with the media but I listened to my gut and took the general safety precautions I normally do (researching the side of town the hosts were in, checking references and giving someone I trust the info of where I’d be and having a back up plan for a hotel in case.)

Need a refresher or want to try Couchsurfing yourself? Read my extensive guide here

I’m so glad I went! The couple had several roommates and also family living with them and I felt like I was visiting old friends and family again. They were all so warm and welcoming and offered to give me tours of the area since some were native to Alaska and they also went on several smaller road trips with me as well since they had off of work the days I was in town.

About half way through my stay another lovely couple from France was staying as well and even though the house was full of people it never felt too crowded and I enjoyed hanging out with the other surfers too! The couple were photographers and were there for several months because they were working on a book about bears in the state which was so cool. They had a lot of fun stories!

As a side note, sometimes it’s normal for hosts to host more than one person or group at a time. It’s been rare in my case but it happens! I was in the living room and the other surfers were as well so if you’re trying couch surfing you have to be open to being social and sharing spaces not just with hosts but their roommates and other surfers too. Sometimes it feels like a hostel for sure and that’s fine! Though rare, I’ve also had experiences where I have a whole section of a house to myself ( looking at you Denver host with a mansion haha!) but it’s more common to be on someones couch in their living room or have a spare room they let you use.

Because this WAS Anchorage (you know, the supposedly scary dangerous city the media talks about) I had to bring up the issue of safety with my hosts while there because I was curious and they had lived in that area of the state most of their lives. They told me like any city there’s areas you avoid and are more sketchy than others and it was true. I went to downtown and some of the “sketchier” areas and felt safer there than I have back home in Los Angeles or any other major city like Chicago or NYC. I know some people have different experiences but it goes to show that a lot of news is sensationalized just like it is with Mexico and other areas of the world we tend to hear bad things about.

I think my couch surfing stay in Anchorage just may be one of my top favorites now along with my visit to Niagara Falls, and Wales. It’s really funny how the places I’ve expected the least from, and people specifically told me not to visit, have been by far some of my favorite travel experiences. 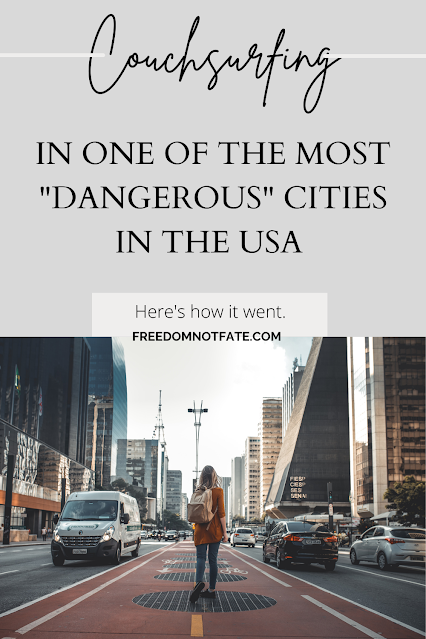 Want to try Couchsurfing yourself? Read my guide before signing up for the platform.

Want to visit Anchorage without using Couchsurfing? Check out some hotel inspiration below!