Lauren
Like most capital cities in Central Europe, Prague has many contrasting personalities. It’s long, layered history dates back almost 1,500 years yet today, it is a lively and progressive city. Since Hollywood shoots many, many movies in Prague (mostly as a stand-in for other locales), you can assume they’ve also noticed Prague’s adaptable appearance.
Yes, in the last 30 years since the country’s independence, Prague has transformed into 18th century Paris, modern-day Moscow, and even Venice and Vienna. Though in recent years, more and more movies filmed in Prague are also set in the city too. As they should, because more movie-loving travelers need to know just how beautiful this city is!
So if you want to find out the filming locations behind the TV shows and movies shot in Prague, here is a list of the top ones.

Tom Cruise’s debut as IMF agent Ethan Hunt was one of the first American movies to shoot in Prague after its independence from Slovakia in 1993. Not only that, the Mission: Impossible Prague film locations aren’t standing in as an obscure Eastern European outpost.
Hunt heads to Prague in one of the movie’s opening scenes to track down a rogue agent. During these scenes, we’re treated to shots of Liechtenstein Palace, the Old Town Square, Hotel Europa, National Museum, and the notable Charles IV Bridge.

Fast forward a couple of decades, this Marvel sequel gives us one of the most prolific movies in Prague since Mission: Impossible. Tom Holland’s Peter Parker heads to Europe on the field trip of a lifetime in Spider-Man: Far From Home, exploring cities like Venice, London, and Prague. He sneaks out of Prague Opera House to fight off the last Elemental, Hellfire.
This vicious battle wasn’t, unfortunately, filmed in Prague as Marvel moved production to the Czech city of Liberec. But a pivotal, intimate scene takes place on the historic Charles IV Bridge between Parker and Zendaya’s MJ.

The huge success of Outlander is largely attributed to its sweeping, cinematic shots of castles and landscapes in Scotland. But in season two, the 18th-century storyline compelled the main characters, Jamie and Claire Fraser, to visit Paris for a while. But Paris doesn’t look much like it did 300 years ago. And the French capital is probably much more difficult for film crews to navigate than other European cities.
So, the Czech Ministry of Culture building and a few Prague streets (Na Kampě and Radnické Schody in particular) became Outlander Prague filming locations. The Strahov Monastery in Prague even stood in for the Palace of Versailles’s library.

James Bond is famous for his jet-set lifestyle as a world-renowned spy. And in the Daniel Craig Bond film Casino Royale, he travels to Prague in the opening scenes where you can see Danube House, a modern office building.
He then flies off to London, Miami, Montenegro, and Venice throughout the rest of the movie. But Prague filming locations stand in as most of these places too. Yes, even Miami!  Prague’s Military Museum transforms into the Miami BodyWorks Exhibition and the city’s National Museum becomes the interior of the Grand Venetian Hotel. Strahov Monastery’s library also earns another 15 minutes of fame as the House of Commons in London’s Houses of Parliament.

5. Troja Bridge as seen in The Falcon and The Winter Soldier (2021)

Following the success of WandaVision (2021), one of the next Marvel TV shows to hit Disney+ was The Falcon and The Winter Soldier. The miniseries explores the next chapter for these two characters after the life-changing events in Avengers: Endgame (2019). It’s quite a country-hopping show with scenes set in the US, Tunisia, Switzerland, Lithuania, Latvia, Poland, and others.
But even Marvel has a budget to stick to, so they used a lot of Prague film locations instead. The Ministry of Culture appears as the Gasel Bank in Switzerland and the Troja Bridge stands in as a bridge on the fictional island of Madripoor. St Gabriel Monastery in Prague transforms into the GRC supply depot in Vilnius, Lithuania, and Olšany Cemetery (the largest cemetery in Prague) becomes a cemetery in Riga, Latvia.

Marvel movies aren’t the only comic book movies set in Prague as Guillermo Del Toro’s original Hellboy also shot scenes there. Olšany Cemetery stands in for a cemetery on the outskirts of Moscow, Russia where Hellboy and the Bureau of Paranormal Research and Defense locate Rasputin’s grave.
In fact, even though Hellboy’s settings are the USA and Russia, Del Toro shot the entire film in Prague. The National Monument becomes the Bureau’s HQ and the Ministry of Transport building in Prague transforms into the Machen Library in Russia.

Prague is technically in Central Europe but that doesn’t stop the US from using it as a stand-in for Eastern Europe. Cinema is all smoke and mirrors anyway! So even though Tom Cruise the actor returned to the Czech capital 15 years later to shoot the sequel Mission: Impossible – Ghost Protocol, Ethan Hunt the character did not.
Director Brad Bird shot some of the Kremlin break-in scenes at Prague Castle, one of the city’s biggest tourist hotspots. Many of Prague’s streets also stood in for the hospital escape scene and Manesuv Most is the setting of a stunt where a car flips off a bridge into a river. It’s an impressive but quite tame stunt by Mission: Impossible standards.

Hellboy isn’t the only film that shot every scene in Prague despite being set somewhere completely different. The Illusionist is set in Vienna, Austria at the end of the 19th century but all the filming locations are in the Czech Republic, particularly Prague. It might have taken a leaf out of the 1984 film Amadeus’s book which is also set in Vienna but features many Prague film locations.
Prague Castle and the city’s main railway station feature but the most stunning location in the film is Konopiste Palace. It stands in as the Austrian Crown Prince Leopold’s home.

Is EuroTrip a good film? Perhaps not, but there’s still a lot to love about it including the fact that it promotes going on a backpacking trip to Europe before college. But even though they shot some scenes in Prague, it isn’t one of the few films set in Prague too. So, Peter Parker’s Euro trip features much more authentic Prague locations!
The four friends in EuroTrip visit England, France, the Netherlands, Slovakia, Germany, and Italy on their trip. Prague stands in for the vast majority of those countries. The city’s main train station stands in for Paris’s train station and the Grand Hotel Bohemia stands in for a fancy Paris hotel.

Looking back through this list of movies in Prague, most are action and adventure films. Jojo Rabbit is one of the few comedies (though it veers into drama territory towards the end) that make the cut. It also seems to be one of the only movies in Prague that uses the city as a stand-in for a German town. This is surprising considering the proximity between both countries, you’d think there would be more.
Since Jojo Rabbit takes place during WWII, it makes use of the country’s spa towns as filming locations more than it does the cosmopolitan city of Prague. But the impressive Petschek Palace plays an unknown German town’s library where young Jojo goes to do some research.

Though it’s a commercial and critical success now, the first Bourne film suffered months of reshoots and rewrites. But the end result was worth the extra effort! Large parts of The Bourne Identity take place in Paris and director Doug Liman did shoot some scenes in the French capital. But as you already know from previous films on this list, Paris doesn’t seem to be a desirable place to shoot for weeks and weeks.
So, it was Prague to the rescue once again. The Boscolo Prague hotel stands in as the US embassy in Paris and there are lots of streets around Prague (including Kampa Island) that make it into the cut.
Prague also plays the role of Zurich at the beginning of the film because Prague really is a chameleon of a city.

More Movies in Prague Are on Their Way The film industry isn’t sleeping on this charming city anymore and there are lots more movies in Prague in post-production right now. Netflix’s The Gray Man (2022) and Extraction 2 (2022) both apparently use the Czech capital as a filming location. But until then, there are plenty of other movies set in Prague for you to enjoy!
Check out these other TV shows and movies in Prague: Amadeus (1984), Snowpiercer (2013), The Spy Who Dumped Me (2018), Tom Clancy’s Jack Ryan (2018 – ), The Courier (2020), and The Wheel of Time (2021 – ). 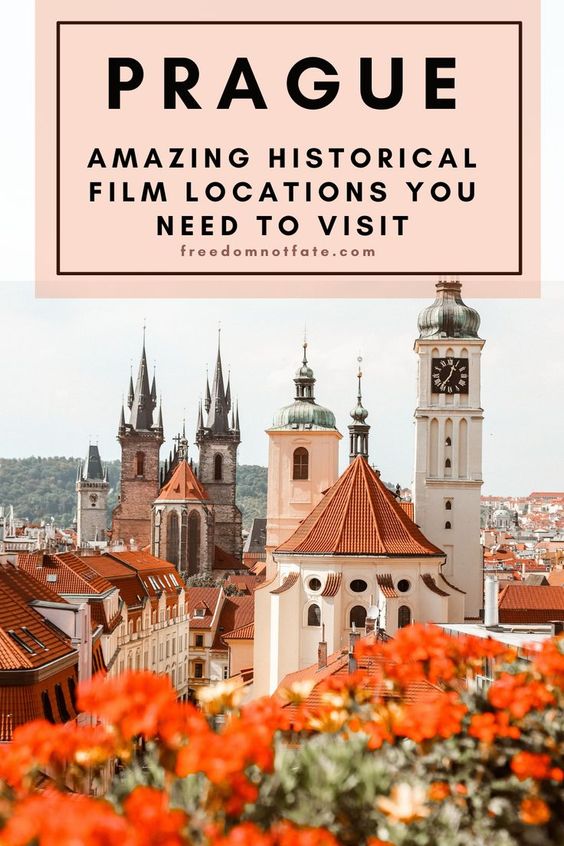